In 1913, the Rev. A. J. Hanson and fifteen charter members founded St. Stephens Methodist Church as part of the City Church Extension Society. For the first several months, meetings were held in a tent. The main property at Park Boulevard and Thirteenth Avenue, just east of the downtown Lake Merritt district, was purchased in 1914 and a permanent edifice was erected in 1923.

On July 4, 1981, the First United Methodist Church building caught fire for unknown cause, and was mostly destroyed, although some of the contents and stained glass windows were rescued. (The saved figural design stained glass windows are installed in light boxes in the hallway of the lower level of the church. Several of the geometrical design windows are installed in the Administrative Office hallway.)

Soon merger conversations began, making the decision in 1984 to go ahead, and a merger ceremony patterned after a marriage was performed by Rev. Don Cunningham at St. Stephens U. M. Church on the first Sunday of June 1984, following which a congregational photograph was taken. It accompanies this article. The name, “Lake Merritt United Methodist Church” was selected and the property at 1330 Lakeshore Ave., Oakland, on the eastern shore of Lake Merritt was purchased. A building which previously housed a Christian Science church at that address, was razed before a new building was built.

During the first thirty years of LMUMC life, three pastors have served the Church and surrounding community. Serving as Pastor and also directing the construction of the new building (in cooperation with the architect and a large building committee) was Rev. Donald Kuhn. Following his retirement, Pastors serving were Rev. Renae Extrum-Fernandez, Rev. Mary Elyn Bahlert, and Rev. Jim Walker. Beginning her pastorate on July 1, 2015, is Rev. Pamela Kurtz.

Determined to be located in central Oakland, with a ministry planned to serve people from all areas of the city, the LMUMC building faces downtown Oakland on the west side, and faces a multi-ethnic Eastlake community along International Blvd. on the east side.

Architect Terrill Wade, of the firm Gillis, Judson, and Wade, designed the new building (Terry is a current member of LMUMC). Initial funding for the construction was obtained through the sale of two previously owned church buildings on valuable property, and two parsonages. It was complemented by donations through three funding campaigns, and no mortgage was necessary. A donor’s wall in the building names all contributors. The completed building was Hallowed on March 21, 1991, at a beautiful ceremony with several guest speakers, the newly organized Oakland Festival Chorus performing, and a large community attendance.

The western main entrance of the building at 1330 Lakeshore Ave., features a colored granite grand staircase. The sanctuary’s floor to ceiling windows frame a beautiful view of the lake and downtown Oakland. The northern wall is nearly completely covered by a triptych of three glass mosaic panels entitled “Te Deum Laudamus” (We Praise You, Lord) constructed under the direction of Louis Comfort Tiffany in about 1920. (put a link to the tiffany mosaic section here.)

The 1255 First Ave. entrance on the east side includes a parking lot, and is wheelchair accessible. Between two wings is a play yard for children. One wing is used as administrative office, and the other wing is composed of children’s classrooms for Sunday School, and weekly schools which rent the property.

Interiorly, there are several multi-use rooms: the large Franklin Stark fellowship room with commercial grade kitchen, and the Minnie Mae Edwards Room furnished as a parlor with small kitchen attached. Franklin Stark was an Oakland attorney and had been very active in many aspects of First United Methodist Church life. Minnie Mae Edwards was mother of TV personality, Ralph Edwards, who attended church and Sunday school in St. Stephens United Methodist Church.

In the lower floor, there is the Aldersgate Room (octagon-shaped) with serving counter. A large parking garage is also on this level. An elevator makes this wheelchair accessible. 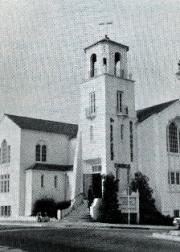 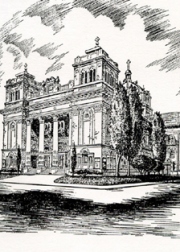 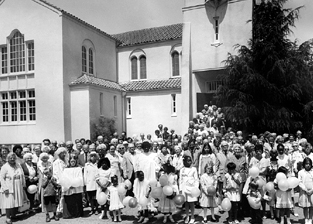 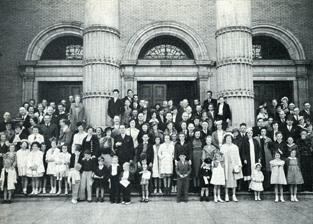 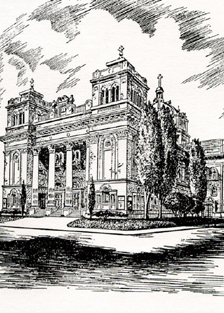 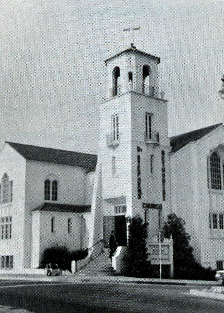 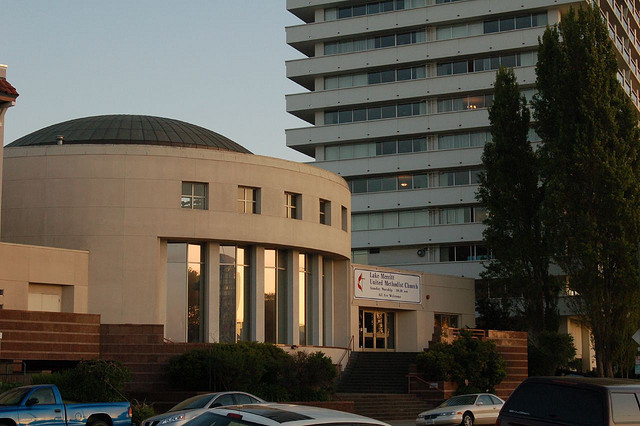 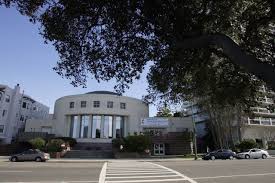