Adorning the walls of the sanctuary inside Lake Merritt United Methodist Church are three glass Tiffany Mosaics. The three panels were originally created for a church in Los Angeles. In 1990 they arrived in Oakland, the last stop in an interesting journey.

First United Methodist Church of Los Angeles, which completed the construction of its new building in 1923, commissioned the studio of Louis Comfort Tiffany (1848-1933) to design and render three mosaic murals to be placed in the front of its sanctuary. The center panel, “Christ Seated in Glory” was given as a gift of Mr. and Mrs. Martin H. Mosier in memory of Martin Henry Mosier, Jr. The other two panels were gifts of Mrs. Melvina A. Lott in memory of Austin E. and George F. Lott. 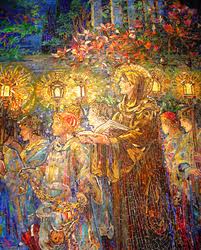 Frederick Wilson designed these mosaics under the personal supervision of Louis C. Tiffany in the studio in New York City. They were briefly displayed in New York before being shipped by sea from New York Harbor to San Pedro and then installed in the church building at 813 South Hope Street in Los Angeles. Rene de Quelin, in a critical review which appeared in the January 1923 edition of International Studio, wrote, “Of the many mosaics executed under the personal supervision of Louis C. Tiffany for the decoration of churches and public buildings, none equals in beauty of color and sublimity of subject the three symbolic panels, Te Deum Laudamus,” which may be translated “We Praise You, God.”

Each of the three panels measures 17 feet high by 8 feet wide, and weighs over a ton. They have been described as being of outstanding beauty, with some two million pieces of iridescent favrile glass, approximately 1/8 inch thick, ever-changing in their purity of color and ethereal effect, and represent the crowning achievement of Louis C. Tiffany’s life of research in the field of opalescent glass. For sixty years this mosaic mural triptych was part of the First United Methodist Church building in Los Angeles; placed in their very large sanctuary in full view of all parishioners as they worshipped, but very few were able to see the detail we now enjoy, and no one was able to touch them. 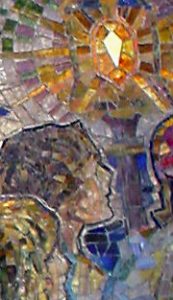 In 1983 First United Methodist Church, Los Angeles was sold to Southern Gas and the building was later demolished. James Ford Grant, an art conservator, was contracted to preserve the panels so that they could be removed and stored. In 1985 First United Methodist Church, Los Angeles, offered to give Te Deum Laudamus to Lake Merritt United Methodist Church in Oakland. Immediately, Architect Terrill Wade incorporated the mosaics into the design of the new church building. Two years later the transfer of ownership was completed. James Ford Grant was again contracted to prepare the murals for their move to Oakland. In order to make the showpiece earthquake-safe, the panels were encased in steel frames and backed with reinforced concrete.

On July 24, 1990, the three panels arrived in Oakland from Los Angeles on two flatbed trucks. Each was lifted by crane through the roof of the still-to-be-completed church. Lake Merritt Church has embarked on a long and happy friendship with all of the people portrayed in Louis Comfort Tiffany’s beautiful mosaic mural.

Each of the colors in the panels is significant. Gold typifies divine glory; silver, redemption; blue, the heavenly aspects of the firmament as well as royalty; crimson, love and sacrifice. 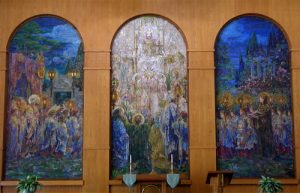 The left panel portrays a processional of choristers with lamps and incense emerging from the tent tabernacle, the dwelling place of the One God of Israel as they moved out of Egypt to the Promised Land.

The haloed central figure represents the clergy of the Church, with choristers representing the church members. Above them are the Chi-Rho shield of Jesus and the winged flame of Christian ardor.

Both this panel and the one of the right portray the beauties of nature in the vine-entwined pergolas; tall trees that suggest Cathedral Spires, and the blue of the skies. And, don’t miss the flowers, a beautiful blooming tulip tree, and small flowers in the foreground.

Christ Seated in Glory: Depicted in the center panel is Christ, attended by angels and archangels, worshipped by Moses, Paul and other martyrs and saints. Jesus Christ is the primary figure, object of praise as Son of God, as he appears to the designer. He is seated in glory upon His shining throne. On either side is an angel, the one of the left is carrying a crown, and the one of the right is carrying the Scriptures. Before him two seraphim carry a Cross, the center of which contains a shining light. These seraphim carry lilies for purity, and palms for victory. 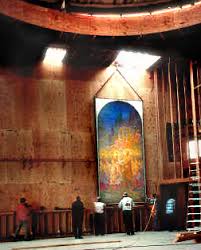 At the far right the archangel Michael carries a sword signifying that he is a special protector of Israel and the Church. The angel at the left carries the chalice of the Eucharist. All of these heavenly figures have iridescent favrile glass haloes or nimbuses, to signify that they are Holy Persons. Below at left is Moses with his tablets of the Ten Commandments. At right is Paul with crossed swords, sign of his fiery zeal for Jesus. The boy in the right front is Pancras, who was an orphan of the third century, canonized because he was martyred in Rome for his Christian stand at the age of 13. The other figures kneeling before Christ represent kings and world leaders who have tossed down crown and scepter on the ground behind them as they worship.

The John Panel: On the right panel we see John reading aloud from the Holy Book accompanied by a processional of choristers and the choir of the faithful. Their leader, representing the monastic orders, proclaims, “Let the Word of Christ dwell in you richly in all wisdom; teaching and admonishing one an-other in psalms and hymns and spiritual songs, singing with grace in your hearts to the Lord.” (Colossians 3:16)

We invite you to touch the murals, and enjoy their texture and richness. And, appreciate the skills in color, cutting and fitting of the sections of glass to so perfectly draw these portraits. 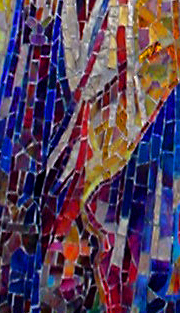 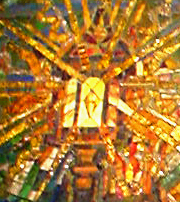 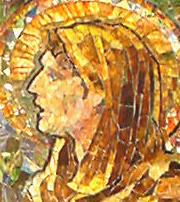 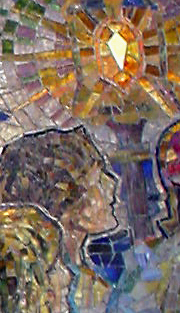 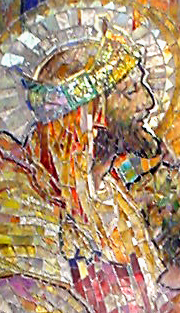