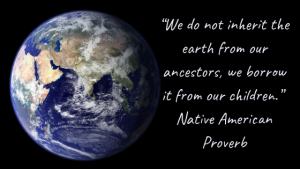 This sermon is the second reflecting on Earth Day, begun last week with Tom Huetteman (found here).  On June 22, 1969, the Cuyahoga River on the southern shores of Lake Erie caught on fire as chemicals, oil, and other industrial materials that had oozed into the river somehow ignited. Just a few months before, on January 28, 1969, and oil rig leaked millions of gallons of oil off the coast of Santa Barbara (still the 3rd largest spill in the nation), the bald eagle, was rapidly declining as a species due to the chemical DDT, while around the world, whales were being hunted nearly to extinction. These and other incidents caught the attention of the national media and galvanized public awareness of the many environmental insults being hurled at the nation and the planet.

In response to the public outcry, Earth Day Founder Gaylord Nelson, who served as the Governor of Wisconsin and in the U.S. Senate, organized a nationwide “teach-in” about environmental issues to take place on April 22, 1970. More than 2,000 colleges and universities, 10,000 public schools, and 20 million citizens participated—nearly 10 percent of the U.S. population at that time.

This outpouring of grassroots environmental activism marked the first Earth Day—a recognition of the importance of caring for the environment and accepting stewardship responsibility for the nation’s resources. It also helped establish a political climate conducive to forming both the National Oceanic and Atmospheric Administration (NOAA) and the U.S. Environmental Protection Agency (EPA) on October 3, 1970.

Ever since April 22, 1970, people the world over take time to recognize the importance of protecting the Earth’s natural resources—be they oceanic, atmospheric, terrestrial, or biological—for future generations.

We speak and act today, in honor, remembrance and celebration of those horrifying and heroic acts that caused the humans to begin to mobilize to defend, restore and protect mother earth.  Our text today reminds us that the God we love, adore and honor, is also the God of creation; they are creation’s God.  The opening words of our Holy Scripture’s begin with “In the beginning God created Heaven and Earth – not humans – the heavens and earth.  We are called to understand that God – Allah, Yaweh, Great Spirit, is also animals’ God, insects’ God, Creation’s God.  Creation, animals, insects, all say, “We too are created by God.  We too have value, meaning, importance, for the joy of God – beyond and above value, meaning and importance for humans.”

The front cover of our bulletins is a Native American Proverb: “We do not inherit the earth from our ancestors, we borrow it from our children.”

We know that our earth is ill.  At this moment in history, it matters little who or what caused it to be so ill.  What matters most is that we care for her, as we would a sick grandmother, or grandchild.  Recriminations can come later, or not at all.  It is like the covid-19.  We know that it was human action using that which God created for human’s self-service, that created this virus and we know that it was and is human neglect that has caused it to make so many of God’s children ill, some mortally so.  Yet now, we are experiencing some joys from the simple actions that humans are taking to save ourselves.  We can and are called by Creation’s God to continue to do all we can to care for the sick, to comfort the dying and work hard to create a solution.

Do so for our mother earth.  When you go out walking, with your mask and hopefully gloves or sanitizer, take a sack with you and pick up the trash you see.  I know that some of us will find this a very difficult task.  Imagine however, that you are pulling out the leaves or gum, or fuzz balls from a child’s hair – who simply cannot do it for themself, combing your grandmother’s hair who is no longer able to do it for herself.

Treat her with the love and honor as you would your grandfather, if his sweater had a hole in it.  Fix it, sew it – learn to do and be different to improve the life and image of your grandfather – our mother earth.

Even when you leave to go to the store, take an extra bag to put trash in that you see.  Yes, some will think you odd.  They are strangers to you and their image of you is as consequential as the stranger driving by you on the street.  And, who knows, you may effect change in their way of living and being.  Afterall, Jesus called us to be transformers for the kingdom of God.

I want to close today with a poem by Joseph Bruchac title, “Bigfoot’s Grampa.”

The old man
must have stopped our car
two dozen times to climb out
and gather into his hands
the small toads blinded
by our lights and leaping,
live drops of rain.
The rain was falling,
a mist about his white hair
and I kept saying
you can’t save them all,
accept it, get back in
we’ve got places to go.
But, leathery hands full
of wet brown life,
knee deep in the summer
roadside grass,
he just smiled and said
they have places go to
too.